2/9/15
Senior co-captain Sydney Collins scores with 3 seconds left in OT to edge URI over UVM at Boss Arena with a great pass from senior Alisha Difillippo!

Kristen Levesque’s dad never had the opportunity to watch her play hockey. Her mom makes it a point to not miss any of her games.

When Levesque received a call from U.S. Women’s National University Team Head Coach Kristen Wright announcing she had made the roster for the World University Games, Levesque was pleasantly surprised.

“The first thing I said was, ‘Really?’” Levesque said. “Then I called my mom immediately after to let her know. She started crying on the phone.”

Debbie Levesque has always been her youngest daughter’s biggest supporter, ever since Leveque’s dad died when she was in elementary school.

Not long after finding out her daughter had made Team USA, Debbie Levesque was booking a flight to Granada, Spain. The bi-annual Winter World University Games will run from Feb. 4-14.

“She was extremely excited,” Wright said about Levesque. “I’m pretty sure she didn’t necessarily believe me at first, but she was so excited. I knew it was something she had wanted, but she wasn’t sure if she was going to get it. She was definitely a refreshing phone call to hear her excitement on the other line.”

Levesque — a junior on the University of Rhode Island club hockey team, which competes in the American Collegiate Hockey Association — is one of 22 players on Team USA. Of all the athletes, Levesque, 20, might have the most unique path to the Games.

Growing up in Sandwich, Mass., Levesque became interested in hockey around third grade. However, with Debbie Levesque raising three kids on her own, the two oldest girls got first priority for competing in sports.

“My mom has always supported me in dreams of hockey,” Levesque said. “She always bought me hockey sticks, even though I couldn’t play yet. She also built a rink in the backyard for me.”

Leveque continued to press her mom about playing hockey, and by sixth grade, she was lacing up her skates and playing on a boys’ team. Levesque honed her skills against the boys for two years before she was able to compete on a girls’ squad.

Since she’s only played hockey for eight years, Levesque is still learning some of the nuances of the game. Most of her teammates at Rhode Island and on Team USA have logged over a decade on the ice, but Levesque doesn’t feel like she’s any less experienced.

“I actually think it’s an advantage to me, because when I started out everyone was so much better than me,” Levesque said. “I hated being the worst one on the team, so I worked really, really hard, and I kind of got that work ethic of working that hard since I was little. I think it has stuck with me the rest of my hockey years.”

Levesque continues to dedicate a large chunk of time to improving on the ice and getting stronger in the weight room.

“As a coach, Kristen’s everything you want in a hockey player on and off the ice,” Rhode Island Women’s Hockey Head Coach Ashley Pagliarini said. “Her work ethic and just her ability to lead by example are her biggest strengths. She just has a love for the game that you can see every day.”

Levesque, who has 19 points in 18 games this season at Rhode Island, isn’t one to put up flashy numbers in a box score. It’s her other on-ice attributes — she’s a self-proclaimed “grinder” — that make her a special player.

“I not a big scorer like a lot of the other forwards, but I’m a hustler,” Levesque said. “I’ll work my butt off in the corners and backcheck really hard and be good in the defensive zone.”

Wright knows Leveque is a great asset for Team USA.

“I think she brings a dynamic type of energy to our team,” Wright said. “She’s super fast. She’s very positive. At nationals last year, she had just a standout performance for somebody that really wasn’t one of the people that everybody would have been like, ‘Oh, you have to take Kristen Levesque.’ But after you watch her play, you’re like, ‘Wow. We need her on our team.’”

Levesque will be joined on the U.S. roster by her college teammate Cassie Catlow. The senior experienced last year’s Winter World University Games and will help Levesque adapt to the international game.

And, of course, Leveque’s mom and older sister, Michelle, will also be in Spain cheering loudly from the stands.

“It’s going to be really nice to have them there,” Levesque said.

“My mom has not stopped talking about it since I got picked. She’s really, really excited.”

URI women’s ice hockey senior forward & co-captain Cassie Catlow and junior forward Kristen Levesque have been selected to represent the USA at the University Games in Granada, Spain on February 4-14!

USA Hockey announced the 22 players named to the U.S. Women's National University Team that will compete at the 2015 Winter World University Games, Feb. 4-14, in Granada, Spain.

The team is comprised of players from collegiate ice hockey teams affiliated with the American Collegiate Hockey Association.

"This is a tremendously experienced group of women we're taking to Spain," said Katie Holmgren, general manager of the 2015 Women's National University Team. "We've performed well in the past two tournaments, and we expect that trend to continue with this year's group." 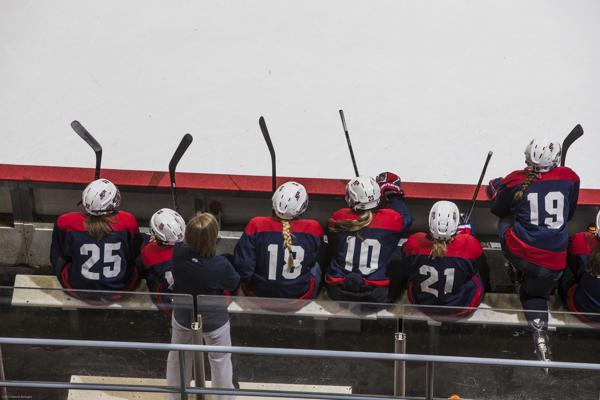 MORE ON THE UNIVERSITY GAMES:

FULL 2015 UNIVERSITY GAMES ROSTER CLICK ON THE LINK BELOW: